“I remember every wand I’ve ever sold, Mr. Potter. Every single wand. It so happens that the phoenix whose tail feather is in your wand, gave another feather — just one other. It is very curious indeed that you should be destined for this wand when its brother — why, its brother gave you that scar.”
-- Garrick Ollivander (PS5)

Garrick Ollivander is an old wandmaker – “the best” according to British witches and wizards – who runs Ollivander’s on Diagon Alley (HBP6). He has eerie, moon-like eyes and makes Harry a bit uncomfortable, as he seems just as fascinated by the power of wands used for evil as those used for good. Ollivander remembers every wand he has ever sold, and greets people by rattling off the specifications of their wands (PS5, DH24). Garrick Ollivander comes from a long line of wandmakers, many of whom have names starting with the letter G.

Ollivander was kidnapped shortly after Voldemort’s return was made public, in summer 1996; Voldemort was in search of information about his and Harry’s wands (HBP6, DH5). He was held captive in Malfoy Manor for a year and a half, tortured, and forced to make wands (DH24). He escaped with the help of Dobby (DH23) and hid at Auntie Muriel’s for the remainder of the war (DH26).

The date of Ollivander's wand shop: “Peeling gold letters over the door read Ollivanders: Makers of Fine Wands since 382 B.C. A single wand lay on a faded purple cushion in the dusty window." (PS5)

If the date on the shop is to be believed, the Ollivander family traces its line back to the Roman times in Britain.

Ollivander's first name was revealed on Pottermore, along with the fact that his last name probably means "he who owns the olive wand" (Wnds).

In the films, Ollivander is played by John Hurt (IMdb). 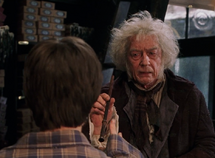