"Boys keep back! They prefer the woman's touch, unicorns. Girls to the front, and approach with care, come on, easy does it. ..."
-- Professor Grubbly-Plank (OP15)

Unicorns are magical pure-white horses with a single horn on their foreheads.

Unicorns are known to live in the Forbidden Forest, but are very difficult to catch or even catch sight of. However, while possessing Quirrel, Voldemort was able to kill a unicorn and drink its blood. Harry, Neville and Draco accompany Hagrid and Fang into the Forest to try and track the injured unicorn. Firenze tells Harry that unicorn blood will keep you alive, even if you are an inch from death, but at a terrible price (PS15).

When Professor Grubbly-Plank was substituting for Hagrid she brought a unicorn to class for the students to study (GF24). Later, Hagrid brought two unicorn foals to the class (GF26).

Unicorns have always been an alluring concept to humans. Rowling captured the essence of this beautifully. Unicorns have been prevalent in fantasy since medieval times.

Unicorns in mythology are considered symbols of purity.

In the film version of "Harry Potter and the Half-Blood Prince" (2009), Ginny and Harry go to the Room of Requirement to get rid of the Half-Blood Prince Potions Book and a woven unicorn tapestry is hanging over the entrance (HBP/f). The famous tapestry is part of a series called "The Hunt for the Unicorn," and in this case titled "The Unicorn in Captivity and No Longer Dead" made before the 16th century in France, and now in The Cloisters museum in New York City (wikipedia).  In the book the entrance to the Room of Requirement is actually near a tapestry of Barnabas the Barmy teaching ballet to trolls (OP18). Perhaps the filmmakers were using the unicorn as a symbol of Harry and Ginny's innocent love. 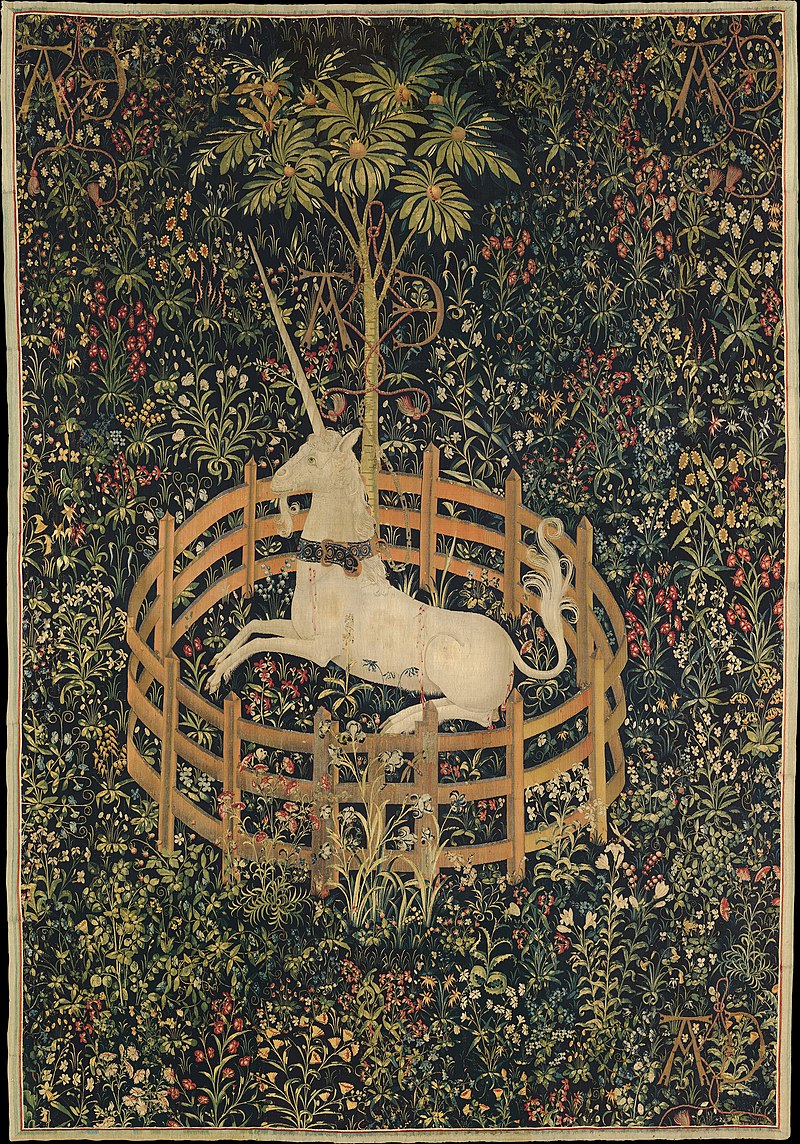 Geneva, a user of the site, makes this point:

I think the unicorn entry should state that unicorns are horse-like creatures instead of just horses. Mythology describes unicorns as sort of horse shaped but they are mixed with other animals such as deer, goats, lions, even birds, and the books never specifically describe them as just horses so I feel that should be reflected here.